This picture was taken after a harrowing storm in the Philippines over the summer. The image packed a big punch with me, so I thought I’d update the wording and share with all of you.

The original was posted via Twitter back in August by this fine gentleman/rescuer – God bless him. 🙂

I don’t know about the rest of you, but the direct rays from the sun sometimes makes me sleepy. About a minute after I snapped this, Camille was fast asleep.

Prior to that, I thought she looked dreamlike. 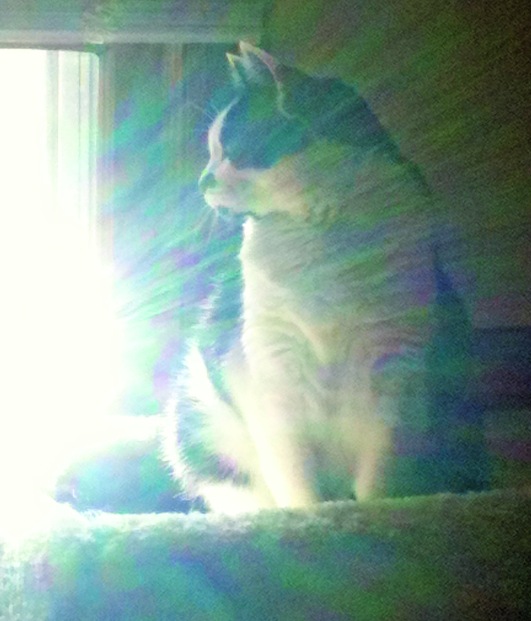 To view other entries in this week’s photo challenge, ‘Dreaming’ –  click here.

So the epsom salt bath by candlelight with accompanying glass of wine that was on schedule for two nights ago was an epic fail. I had a minor/what could’ve been major, pet emergency.

Camille and I laid down for a short napper around 5-ish on Monday. I woke before her, gathered my cellphone and snapped the cutest pic of her laying beside me holding up her ‘hand’. (Yes, they have hands.) 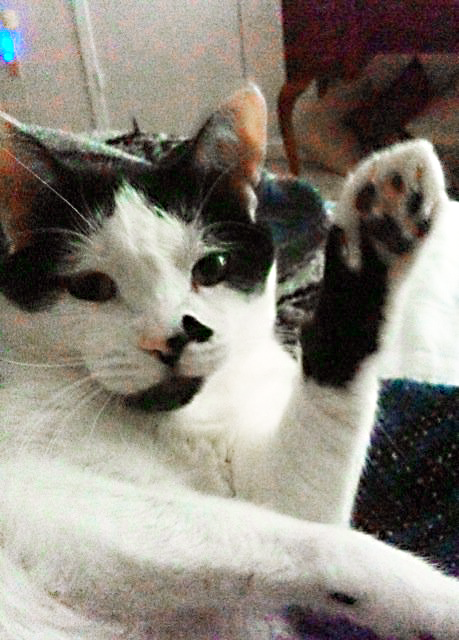 Anywho, not five minutes after this pic was snapped she came running into the bedroom doing something I can only describe as a mix between a meow and a scream. I’ve only heard this terrible sound come from her once before – it was during the time I was trying to get her used to car rides. The few weeks it happened, I didn’t think I could endure it. I immediately noticed she had her belly close to the ground – not a good sign. She then took off (still performing the same ‘scream’) towards the living room, looking back at me to make sure I was following (YES, dog-lovers – cats do this too) and proceeded to lead me to the window overlooking the balcony where her cat-condo is at. There it was, about knee-level in the window – a red wasp, in all his effing glory. My furbaby had just ratted out the enemy’s location.

But the terminator adrenaline took over. Split-second checklist:

Meanwhile my baby girl was back in my bedroom, injured. She had jumped on the bed and was still doing that horrible scream. I made the quick transformation from wasp-terminator back to furmommy-mode.

Her little paw swelled up to twice it’s normal size. I made her a little icepack and held her paw on it for a couple minutes at a time. I watched/loved on her for the next two hours. She really is the most appreciative little thing – she knew I was trying to help her and was worried so. About 45 minutes after the initial sting, the icepack was still sitting in front of her and she sat her own paw on top of it, so darn sweet – she must have been feeling some relief from it. I’m so thankful that there wasn’t a stinger to pull out, but also not sure how many times it may have stung her since wasps can sting multiple times. As the case may be, this particular wasp won’t be stinging any more kittehs…

A couple of hours later, she was back to ‘answering’ my questions (she’s one of the most vocal cats I’ve ever had the pleasure of being mommy to).

Thank the Good Lord, as of yesterday she’s back to normal. Breathe, Bonnie.