I don’t know about the rest of you, but the direct rays from the sun sometimes makes me sleepy. About a minute after I snapped this, Camille was fast asleep.

Prior to that, I thought she looked dreamlike.

To view other entries in this week’s photo challenge, ‘Dreaming’ –  click here.

Last night I had a monumental moment – I built my very own fire. This might sound silly to some of you, but for as long as I can remember someone else has always built them. It’s good to know I can make one on my own.

Of course, I had some help from the little match-lights. As warm as it’s been, it could very well be the last fire of the season and I was proud to have built it. 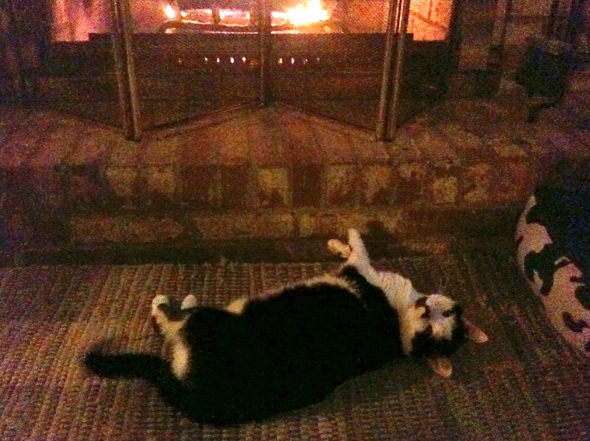 It’s the little things in life… like how my cat now thinks I am a god.

A Day in the Life of Camille

This morning as I sat in front of my computer, my trusty sidekick hung out with me.
I caught her snuggling with Mr. Frog (the first stuffed animal Keith ever gave me).
For once, I happened to have the camera right beside me.

A few minutes later, she gave her customary ‘hummpphh’ from her table beside the computer desk. Knowing my little girl so well, I immediately took note it was more than a ‘hey mommy, over here!!’ grunt. It was obvious she was planning a desk-launch, and she wanted clearance to do so.
And so the stance was taken. 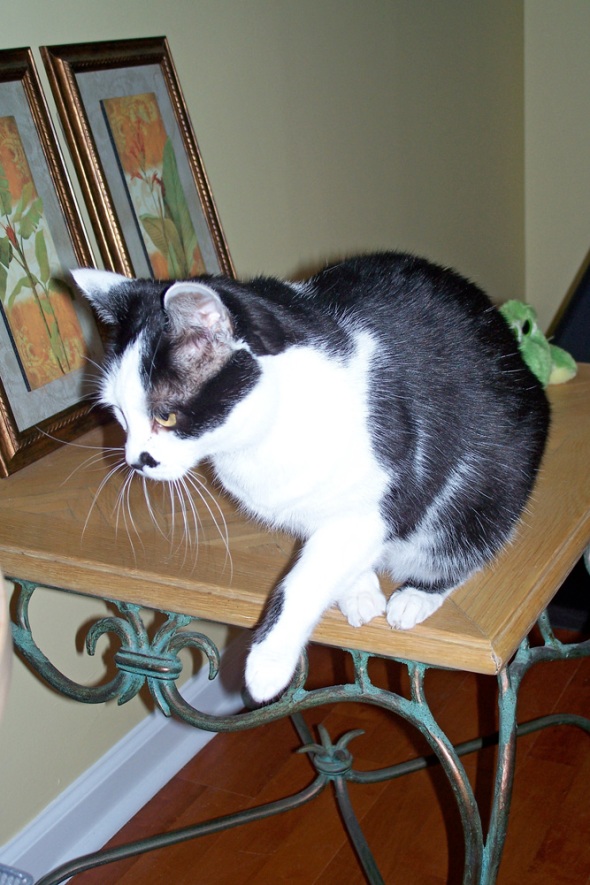 “No, Camille.” Hunched forward again in pounce mode. (A little firmer now) “Camille – NO.”
She then backed off completely with one exception – her little left paw was left suspended
and quivering in mid-air. 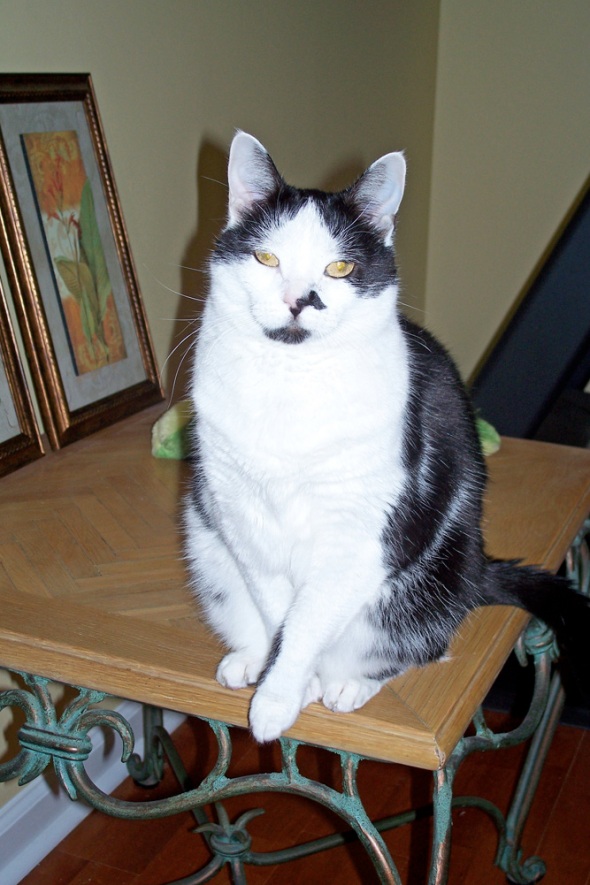 And hung. And quivered.

“Aren’t I cuuuuute, Mommy?
Let me squint my eyes at you to let you know how much I love you Mommy and,
and, and… you are getting very sleepy, Mommy…” 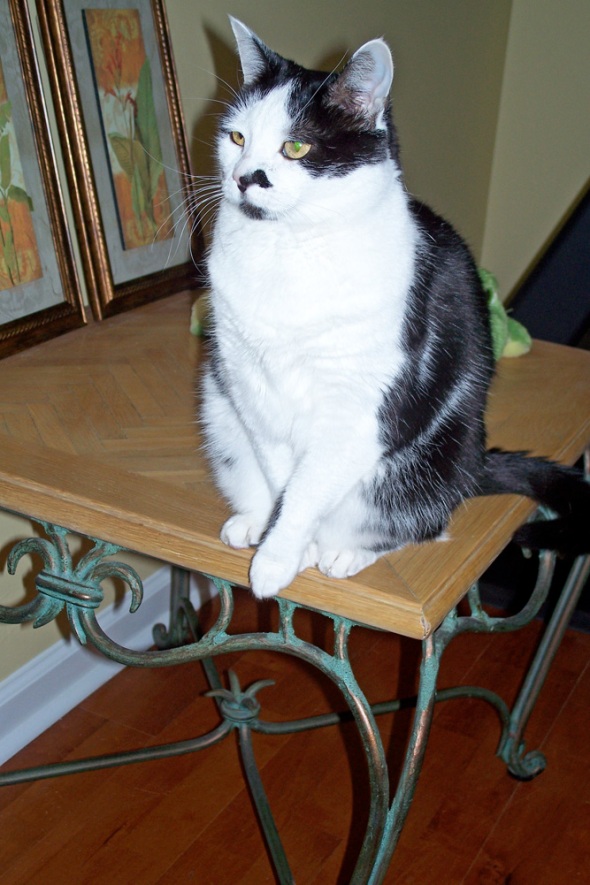 “sooooo, now could be my chance – lemme slide in a little looksie at two o’clock…”

She shoots – she scores. 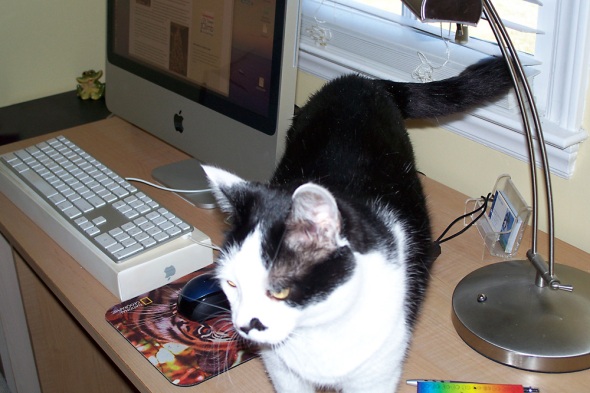 After digging her out from the wires on back of computer (oh how I hate that)
comes the dreaded walk of shame.

You’re never too old to be taught a lesson. In my forty-three years, I have never been bitten by an animal. Never. I’ve been bitten by plenty of insects, and I can even throw a boyfriend or two in the mix. But never an actual animal bite.

So am I just good like that? Absolutely not – I’m just lucky and trust me I know this. The past couple of days have been a heartache for my mother and I.

An adolescent stray calico cat had taken up residence in mom’s yard for about three days. Let me say first that if I were a stray, I’d go to my mother’s back yard to live. Her yard is literally a Utopia – add the fact that she loves animals and it’s a win-win for the stray. Both of us were trying to find the cat which she called Callie a home. Two days ago, I dropped by her house to see her on the way home from work. Sure enough, the little thing jumped right up in my lap the moment I went outside and sat down. It was obvious by how tame she was that someone had likely dumped her out. Oh how I hate that – our pets should not be disposable.

For the next 20 minutes or so, I continued petting her as she nuzzled her head and made biscuits like cats do. Mom even got a movie of her doing this, she just melted our hearts. Lo and behold, for whatever reason something spooked her – and within less than a second she had bitten my hand and was back down on the ground. She got me good, too – all four incisors made puncture wounds. It took until later that night to get the bleeding to subside.

Since the cat was a stray, Mom had to make the dreaded decision of letting animal control take custody of her, where she’ll be held in quarantine for ten days to monitor for rabies. With us both being animal lovers, it’s really taken it’s toll on us. Mom had already gotten attached to the little thing. As for myself – I feel very responsible for what will likely be certain death for the cat. I’m told I shouldn’t, but so far it’s not something I’ve been able to shake off.

Mom went through so much crap yesterday just to get to the right source – that’s a perk of living in a big city, everything is automated with call-backs. Cops here don’t even come out to car break-ins anymore to take a report. We both had to meet with animal control to file the report and let them see the bite. Today, I’ve already gotten two calls from city workers at the health department ensuring I took the right steps. I held my breath as I answered what I recognize to be ‘city prefix numbers’ – afraid it might be a positive on the rabies, or at the least a call to come in for the shots. I felt compelled to immediately insert a line about having my own doctor who was aware of the situation (done as I hear this little voice screaming inside my head… ‘nooo, you can’t make me!!’).

Cat of the Day

I have the sweetest cat. Thank you, Lord. Don’t get me wrong, even if I’d had the misfortune of having a mean one I’d just deal with it, since I don’t believe in giving up the animals you made a commitment with unless something is really amiss. Of course I realize there are extreme instances that do warrant replacement, and by that I mean re-homing.

In any case, both of the past two cats I’ve owned are simply… well, female. My Sadie who passed in 2006, was a Queen. She never knew a stranger, and would come up to non-cat persons and make a spot on their lap – providing them with the added bonus of making biscuits. This always got a giggle out of me. Camille, my current babygirl, is a Princess. She however is an introvert, and takes much time to acquire the trust of any person. The two personalities couldn’t have been any further apart.

I’m quite aware that there are loads of cat-haters out there. I even read a post of a favorite blogger recently about how loathsome this person thought cats were… he wrote of how they ‘lurk in the shadows’ and ‘don’t ever show theirselves unless it’s to attack’. Sweet bejesus, nothing could be further from the truth. This person obviously neither a) never owned a cat, b) had a feral (wild) cat, or c) lived a party-like-its-1999 lifestyle where the animal was just plain afraid to come out.

How about this… my girl meets me at the door every day. If she’s not there yet, then she’s running (yes running) from the back bedroom to the front door to me – bleary-eyed as hell from her afternoon-long nap. It’s the same ritual every day… I scoop her up on my shoulder and start talking baybay talk to her. She, in turn, starts snuggling my neck as if wanting to almost crawl into me. I walk her around the condo bouncing her like a baybay (should I be embarrassed?) (have I mentioned how very vocal she is?). She is so vocal during the rest of the night that I’m beginning to realize I need a laptop BAD. The crying that goes on during my time behind the iMac is absolutely unreal. All the instances in-between this are… well, let’s just say that we never lack for conversation. The word spoiled pretty much sums it up! I need to add in the fact that she absolutely LOVES my guy. And that, ummm… she owns him. 😉

I entered Camille in the Cat for a Day contest on a local country station, Kat Country 96.9 (wkktfm.com). While I believe that most entries secure a spot on the calendar, I was surprised that my entry today made tomorrow’s calendar spot. So, therein lies Camille’s 15 minutes of Limelight.

Cat of the Day… on Kat Country