Oh how I’ve missed my little blog! I feel the weight of a thousand plus words just waiting to be written, though I’ll spare you that one today. It really is amazing how dependent I’ve gotten on this ‘release valve’ of mine (I love calling it that) and when I can’t write, or vent, well – it’s like a part of me is missing.

Late last week I graciously acquired a case of the intestinal flu. I have not been this sick in at least twenty years – it literally landed me on my ass. This is something that I would not wish on my very worst enemy. I was more than a little concerned over our beach trip and the fact that my boyfriend would also contract this highly contagious virus, since we’d been together for dinner just the night prior. Amazingly enough, as of right now post-weekend – he’s still virus-free. I thank the Lord for this. 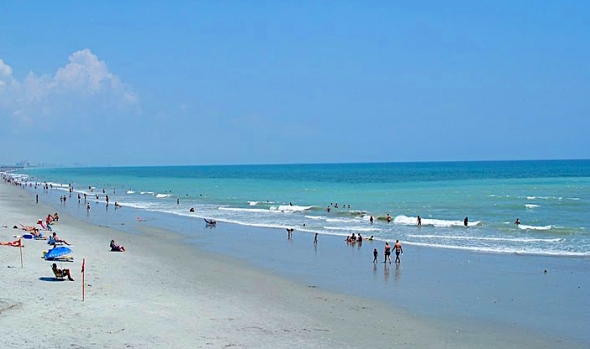 So we had our little beach trip. 🙂 K called it ‘one of the most amazing times he’s ever had’ to which I have to agree. Ironically enough, his sister and her husband were also taking a trip down there, staying 2 blocks up from us! It made for double fun, we got together for a bikini lunch on the beach then had dinner later at Murrell’s Inlet, and barhopped a couple of venues there on the tiki strip. 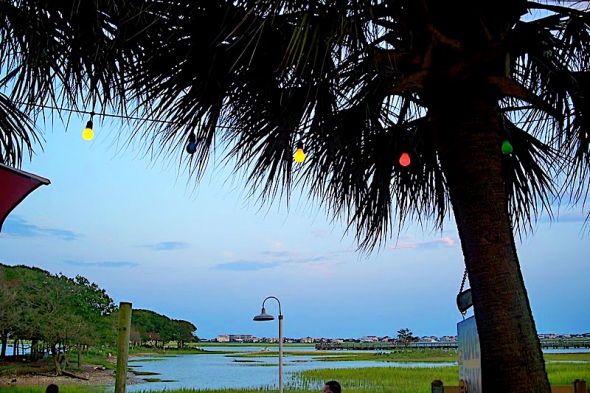 Saturday night, we went out to the infamous Garden City Pier (I heart this place) where in peak season, a band plays at both ends of the pier. We actually found a table at the end of the pier where the band Coldshot was playing. Keith made a dream of mine come true when he stood and held his hand out to me for our first slow-dance ever on the pier. I can honestly say I have never been more in love with him than at that very moment – and it’s that moment in time I know I’ll remember for the rest of my life.

Another first happened when we were in the ocean – we were about waist-deep (chest-deep with the waves) when he noticed about 100 or so feet out a pack of dolphins gracing us with their presence. As the waves allowed, we watched them move rhythmically in and out for about 8 minutes from one side of the ocean to the other, until they finally faded from our sight. I’ve never physically been in the ocean and privy to dolphin sitings all at once, and we both felt very privileged.

I’ll even go so far as to say it was magical. But then again… so was the dance.

Well, it’s now August. I can’t believe how fast this summer has gone by. This summer, and well, the whole year for that matter.

August 1st is a special day for me. It’s the one-year anniversary of mine and K’s first date. I can’t believe it’s been a year already…

We love reminiscing about how nervous we both were on that Saturday night a year ago. Being that we hadn’t seen each other in so many years, I opted to walk down and meet him in my parking lot instead of the added stress for both of us with him coming up to the condo. The walk down all the steps from the third floor seemed to take forever, and I was hoping to God I wouldn’t trip and fall down them in my heels. There, leaning back against the hood of his car in true 60’s Greaser fashion, was the most beautiful man I’d ever seen – grinning like the Cheshire Cat on Alice in Wonderland. As I went up to hug him, my heart was about to beat out of my chest and I hoped he couldn’t see it. On that first date we ended up going to a place right across the river to eat, then catching the latest Harry Potter movie. Guess you could say we’ve been kinda stuck like glue together ever since, and well, I wouldn’t want it any other way.

I’ve got more up the ole’ dayplanner sleeve that I’ve nostalgically saved, but posting some of those monumental moments on here just wouldn’t be fitting. But hey, don’t I get a pat on the back for not kissing him on the first date? Or is that more deserving of a slap? **dumbass**

It should go without saying that having a high level of mutual respect for each other is a must-have in every successful relationship. Just a couple of weeks ago, K’s ex made a grave attempt to worm her way back into his life – even being so desperate as to use their daughter as bait. The transparency of the lies she told were obvious to everyone. Of course, there was also a hidden agenda behind the facade. You see, she’s faced with much certainty of losing her case in court, and trust me when I say it’s gonna be sweet retribution for a man who was put through absolute hell for so many years. But not to worry – I didn’t just take his word for it. A woman with even half a brain will do her research on a prospective partner. I’m friends with a couple of people who actually know this woman… and she is indeed lower than a snake.

Last night he and I went out and did a little pre-celebrating. The restaurant we ate at last year has since closed down, and word has it that the local pub and grill across the street has the same owners, just took on a different name. He suggested going there for nostalgia’s sake, so we did. The food and drinks were excellent but the service really sucked! Upon learning that we were ‘only’ ordering appetizers and drinks (which still resulted in over a $30 bill) the waitress apparently decided we were deserving of neither good service nor a good attitude. As with most things though, we joked and took this in stride, and moved on across the street to the much more upscale restaurant that my own daughter works at. Of course, we got excellent service there – along with the additional bonus of us all getting to spend some quality time together and cut up for a while. 🙂 She was right… we shoulda just went there in the first  place.