This recession has really played havoc on the new construction business, that’s no secret. Being an elevator mechanic, this 100% affected Keith’s career. A few weeks ago, his old job called and asked him to come back. This is the place he’d worked for almost 18 years, who’d initially laid him off several months after we’d started dating back in ’09. The company that had since ‘picked him up’ (I use that term extremely loosely) would only work him for short tenures, which was when they got in a crunch and really needed him. Then BAM – it would be dude, we don’t need you to come in tomorrow. Actually uh, maybe not for another month or two. (cough-cough… shady) Even though he offered them a good working notice, when Keith informed Shady Place he was leaving for full-time working status again, the guy actually copped an attitude about it. Like a dog that didn’t want the bone but didn’t want any other dog to have it either. Go figure.

Thought I’d share several pictures he took of the silo his team is currently working on. All work is outdoors so they’re in the element for sure, but he thinks it’s super-cool. So do I. 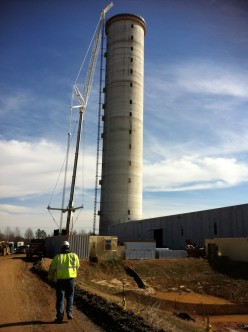 It’s over 400 feet up, and if you enlarge the picture below you can actually see the Charlotte skyline in the center. I’m just not a real big fan of the splintering wood. 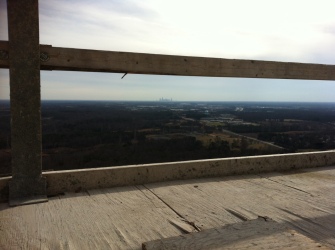 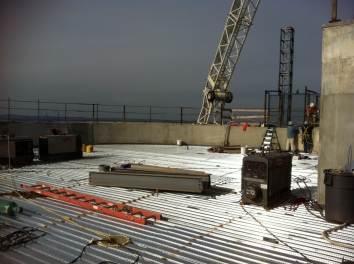 He said this job is unusual because of the man-made catwalk around it and the makeshift elevator on the outside they have to ride up each morning in the dark. Up high the wind is double to triple what it is on the ground. This structure differs from skyscrapers and other taller buildings he’s worked on in the past in that there really isn’t a retreat indoors. The picture of the center steel above reminded me of a scene from the movie Shawshank Redemption, where as they retarred the roof, old Andy Dufresne bargained for his ‘coworkers’ to have three cold beers apiece.

Friday night Keith told me about an opportunity that he put his name in the hat for, so to speak. It would be for a two-year stint in the Bahamas, for a new resort that’s going up – so he would be there for the long-haul. He won’t know immediately whether he is chosen, but I so totally would’ve have put my name in for it too. I mean, if you don’t have small children at home or some other commitment that needs honoring, how could you resist? The pay would be outstanding and well – there’s a lot of perks to it, as well as disadvantages. If his name does get picked… we’ll just go from there.

As of current – he’s just happy as a lark to have his old job back. 🙂

Today marks my six-year anniversary with my current employer. Ironically enough, that particular day in history also fell on a Monday! I am ever grateful for my career. It’s something that I’ve been blessed with never having to be without… a job.

Prior to my current employment, I had been with a company for 11.5 years. For all intents and purposes, it was the company I’d intended on retiring from. As it happened, a series of unfortunate events beyond my control made it necessary for me to seek employment elsewhere. I never could’ve hoped to find a job as good as the one I have now – nor can I say enough good about the group of people I work with.

And so I’ll say it again, because it bears repeating over and over – timing really is everything.

Out of the darkness

A very bright spot happened yesterday. I received a phone call from my daughter, who couldn’t wait to let me know she’d landed the job she’s been interviewed on for the past several weeks. It’s a much coveted placement in one of the southeast’s leading healthcare systems, Carolinas Healthcare System (CHS). Getting her foot in the door in a sector of this large facility is a dream come true for her, as they are well-known for their advancement from within. Carolinas Medical Center (CMC) is the flagship facility of Carolinas HealthCare, and the division she will work in. As one of North Carolina’s largest hospitals, it serves as the regional referral center for western North Carolina and northern South Carolina.

To gain a career within a sector of the ‘Tree of Life’ facility has been her dream for some time now, starting well before her college graduation this past May. It’s truly a blessing that it came about a) without her having an inside source, and b) being so fresh out of college, even with having a bachelor’s in Psychology. We’re all aware of the shortage of jobs nowadays, not to mention how difficult it is for a fresh college grad to get their foot in, well anywhere.

While I admit that her being my own daughter might more than sway my opinion, one only has to experience the pure ‘effervescence’ she emits while in her presence. She’s like a burst of fresh spun air – and her personality just rocks. Heck, I’d have hired her too.

Effervescence… thanks, Dad! There’s no other word I can think of more fitting. Bet ya didn’t think I’d use that one, did ya? 🙂

It also comes at a very pertinent time in her life – next month she will be moving into her own brand new apartment and embarking upon a whole new ‘life on her own’. Only now, she also gets to embark upon a new career. So happy for my babygirl!