There was another shark attack on the SC coastline this past weekend involving a 13-yr old girl, and I just read of another incident yesterday with a 10-year old boy. Though both were injured, they’ll be okay. Are the attacks increasing, or is it just me?

I probably watched a total of several hours combined this weekend of Expedition Great White on Nat Geo channel. These presentations are obviously a very favorite of mine, and anytime one is on (any shark show, for that matter) it never ceases to capture my full attention. Aside from pursuing writing, it would’ve been a lifetime dream to have a career in marine biology. I simply cannot imagine the ability to do that for a living. I’d literally scrub the decks of the vessel just to be there for a couple weeks time, to have that experience. I hope to be able to go down in a cage someday… I know it’s gotta be expensive, but it’s on my bucket-list anyway. 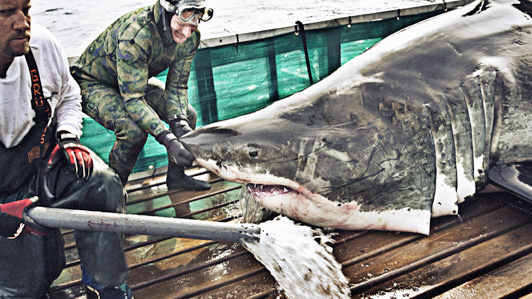 This shark was successfully tagged and released on an episode of Expedition Great White. The scientists, doctors and crew are all super-intricately careful as to how this is accomplished – and the safety of the shark is of utmost importance. I felt the need to explain the purpose of this photo because it almost appears as a hunt-and-capture shot… but it’s not.

We are learning so much more about these magnificent creatures. The research being done on them now has intensified times ten. It amazes me every time I witness a twenty-foot great white be caught, exhausted, and captured temporarily on a custom platform designed specifically for it. This has enabled so many different procedures to be performed that were never before possible. The sharks are successfully released well within 20 minutes. These shows have really raised awareness of our marine life, for which I’m grateful.

My mother and I used to go way out into the ocean, floating sometimes for long periods. We never pondered the the thought of a shark, much less ever ‘worried’ about it. Now? Well, I still love and respect the ocean more than ever. But you would literally have to dope me up (very well) in order to get me to go out over my head and remain there for any length of time NOW. So what’s changed? I mean, we knew enough then – we’d even seen the movie Jaws. But we didn’t have that certain ‘fear factor’ then. I’m still not quite getting that.

There are several things you can do to help prevent a shark attack, most of which are common sense. Even with that said, sometimes common sense factors aren’t exercised. For one, don’t go out swimming around a pier. Swimming in water where all that bait is never smart, besides, you don’t want to be hooked yourself, right? Also, stay in groups whenever possible as sharks are more likely to attack a solitary individual. Avoid being in the water around daybreak or twilight, because this is when sharks are most active. Never wade deep when you are bleeding. Avoid wearing shiny jewelry, since the reflected light resembles the sheen of fish scales. Lastly, avoid areas where you see diving seabirds – this generally signals a sign of bait fishes or other feeding activity.

If you are in the ocean and spot a shark, the international hand signal for ‘shark’ is a flat hand with thumb against forehead, as in a fin. Be sure to use it if you need to – your voice alone is not much help when you’re in the ocean.

For the latest information on shark attacks, this one’s a great tool. http://www.sharkattackinfo.com/