The mariner has landed 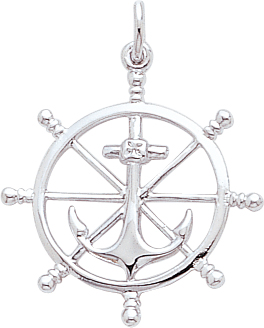 I’ve decided that my ‘theme’ of the summer is gonna be nautical (yeah I know, my theme every summer is nautical). I’m now on a very stringent search for a silver pendant for a necklace. Nautically-themed, and I definitely want it to include an anchor. I ran across this one online and fell in love with it. I found it about a month ago and saved the picture, but I don’t know what website I found it on! The dufus I am.

Onto the rant of the day. Why can’t everyone just mind their manners and act nice? It’s not that difficult really. There’s always gonna be that idiot out there waiting to ruin your day. If ya don’t believe me, just look up a (positive) news story or youtube video, and check out the flow of comments underneath. I guarantee you the more comments it has, the more idiots on there saying stupid chit just to try and stir the pot or offend someone. Now I see why alot of people who upload vids to youtube disable the ability to leave comments.

So a famous television producer (formerly of Survivor) is being held in suspicion of the death of his wife while on vacation in Cancun. Now it’s come out that last weekend she found out he was having an affair. YOU KNOW ME, HERE IT COMES…. WTF??? Are ALL men cheaters? Wait, I know the answer to that – but it still doesn’t stop me from asking the question from time to time. What the hell are these men thinking? With? Ya wanna have sex with someone other than your wife? Okay, then save her the pain and humiliation and just separate first. Is it really that hard? Pardon the pun…

It’s all a big steamin’ pile of pelosi, I tell you.

I received an email recently that I just have to share the contents of.

(No, not curse… we call it cuss here in the south so get used to it)

Years ago when I sometimes used unsavory language, I often used the expression “Bull S***.” As I grew up a bit and discovered it was not necessary to use such crude language, the expression became “BS.”

What did I really mean when I used those expressions? I meant that something was ridiculous, or idiotic or a half truth or just plain stupid. It covered any number of negative formats. The dictionary defines it as: nonsense; especially: foolish insolent talk.

I have decided that I no longer will use either of those expressions in the future. When I have a need to express such feelings, I will use the word “pelosi.” Let me use it in a sentence. “That’s just a bunch of pelosi.”  I encourage you to do the same. It is such a nasty sounding word, it really packs a punch, we are no longer being vulgar, and it clearly expresses our feelings. If enough of us use it, perhaps the word could be entered into the dictionary.

When on a ranch watch your step and don’t step in pelosi. It will get on the bottom of your boot and won’t go away until the next election. What a fitting and descriptive legacy for the Speaker of the House!

Please and thank you.

This entry was posted on April 9, 2010 by Bonnie. It was filed under Entertainment, News, Ocean, Rants, Relationships, Thoughts, Vacation .