Some things in life run unbelievably short of what my mind is able to comprehend. Things. Like Tidal Waves. Mega-scrapers. Terrorism. Sharks. Adultery. A faulty sort of bend in reality is how I feel about these things. Even though life is continually reminding us of their true existence, the full perception of them never seems to develop within my brain. I think that’s why I like to write about these things, bring them to the surface. My fears.

Yeah. All of them seem to fall into that same category. My fears.

I wrote about the  Burj Dubai when it opened. It’s another massive architectural feat that I can’t read or see enough of. I’ve wanted to write something on the Skywalk since I started blogging –  but I think it must blow my mind so much more so than the average person, that I’ve just never been able to convey my thoughts into words. I’ll give it a grave attempt now.

How about this one:

If you were presented with the opportunity to visit the Grand Canyon and walk out on the glass skywalk, would you? Or should I ask, could you? Keep in mind, this ain’t no stroll across the mile-high swinging bridge, my friends.

If asked the question above I would respond quickly with a firm no. I personally would be unable to walk even one small step onto the platform. No way, no how. If I were forced, my heart would most certainly fail me then and there. This would be the ultimate test of my own fear of heights, resulting in Epic Fail.

Then again, my fear of heights surpasses that of most others. I abhor the word fear – always have. Rather, I like to think that I’m altitude-challenged. 😀

Situated on the Hualapai Indian Reservation (pronounced wä’lə-pī’), this remarkable achievement in engineering was constructed with more than a million pounds of steel beams including dampeners that minimize the structure’s vibration. It was designed to hold 72 million pounds, withstand an 8.0 magnitude earthquake 50 miles away, and endure winds in excess of 100 mph. The horseshoe-shaped walkway juts out about 70 feet into the canyon.

It has been estimated the walkway could carry 822 people that weigh 200 pounds each without overstress, but maximum occupancy at one time is limited to 120 people. (The question has been asked, just how comfortable would you be walking alongside 119 other people on this thing? Again, just a personal observation…) 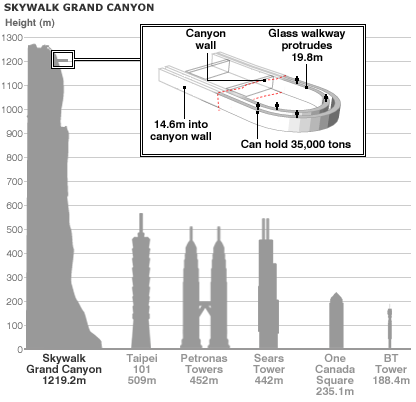 I have to keep reminding myself these measurements are in METERS. Picture source: Skywalk Website (www.grandcanyonskywalk.com)

The Skywalk is commissioned and owned by the Hualapai Indian tribe. According to Hualapai officials, the cost of the Skywalk was $31 million. Future plans for the Grand Canyon Skywalk complex include a museum, movie theater, VIP lounge, gift shop, and several restaurants including a high-end restaurant called The Skywalk Café where visitors will be able to dine outdoors at the canyon’s rim. The Skywalk is only the cornerstone of a much larger plan by the Hualapai tribe, which it hopes will be the incentive for a 9,000-acre expansion to be called Grand Canyon West. This development would precipitate the growth of a 100-mile stretch along the canyon’s South Rim. The vast addition would include hotels, restaurants, a golf course, as well as a cable car to ferry visitors from the canyon rim to the Colorado River – an area which has been previously inaccessible. All this blows my mind… I especially cannot fathom which piece of land they might choose for a golf course.

A short doable 2 1/2 hour drive from Las Vegas, this magnificent framework promises a sure thrill for the not-so-faint-at-heart persons unlike myself. A flat rate adult admission of around $30 allows access to the Skywalk, where you may ‘hang out’ as long as you like up until closing. You know – hang around, have some casual conversation, file your nails, do a little barfing. That type of thing.

This entry was posted on March 16, 2010 by Bonnie. It was filed under News, Travel and was tagged with 2010, America, Heights, News, Travel.