No Shadow… Spring is Near!!

It’s Groundhog Day, and for the first time in a long awaited while Punxsutawney Phil is not afraid… that’s right folks, NO SHADOW!! Know what that means? 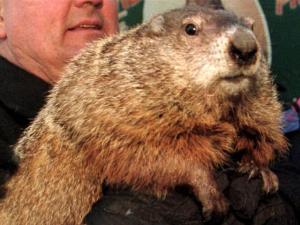 The story of Groundhog Day begins with Candlemas, an early Christian holiday where candles were blessed and distributed. Celebrators of the holiday eventually declared clear skies on Candlemas meant a longer winter. The Roman legions, during the conquest of the northern country, brought this tradition to the Germans, who concluded that if the sun made an appearance on Candlemas Day, a hedgehog would cast a shadow, thus predicting six more weeks of bad weather or “Second Winter.” German immigrants brought the tradition to Pennsylvania, but how did Punxsutawney Phil emerge?

In 1887, a spirited group of groundhog hunters from Punxsutawney dubbed themselves “The Punxsutawney Groundhog Club.” One member was an editor of Punxsutawney’s newspaper. Using his ink, he proclaimed Punxsutawney Phil, the local groundhog, to be the one and only weather prognosticating groundhog. He issued this proclamation on Candlemas, and yes, Groundhog Day. Phil’s fame spread, and newspapers from around the globe began to report his Gobbler’s Knob prediction. Info from http://www.visitpa.com/groundhog-day

In related news, February 2nd is exactly the halfway point between the Winter Solstice and the Spring Equinox. It is the winter midpoint or ‘cross-quarter’ day. The coldest, bleakest part of our winter season is now officially half over!