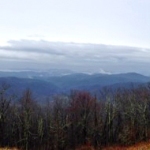 This past weekend we packed our bags and headed up to Blowing Rock in the beautiful Blue Ridge mountains for an overnight trip. Normally being a day trip, it amazes me the intense coordination and planning it takes for us to ‘get away’ for just one night. The house sitter for our baby boy Mojo, food and drink shopping for said house sitter, coordinating the alarm system, etc. Of course, it does help knowing the house sitter is non other than my baby girl and her robust boyfriend. So at least there’s no huge guesswork on food choices there.

We stayed in this same place March of last year, a week after Keith proposed – so this return trip was very special to us. Originally built in 1874, the adorable hotel is called The Hemlock Inn. Today, the original inn has been completely refurbished with additional rooms having been added. Each of the beautifully decorated historic rooms offer individual rustic mountain settings complete with hardwood floors and antique decor. Each room having it’s own unique decor, we opt to stay in a different room each time. This was our room last weekend: 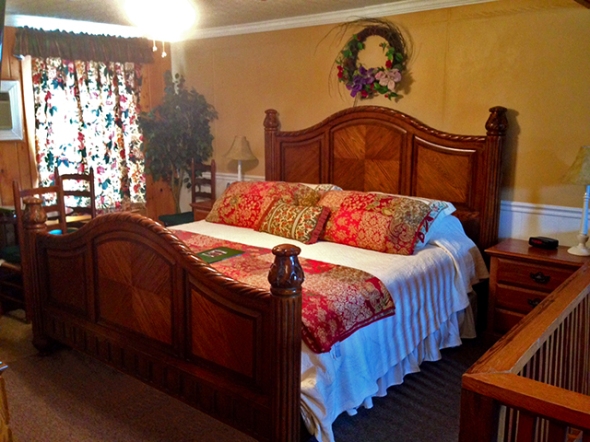 Here’s a couple shots from their website showing what’s in store once our beautiful warm summer weather decides to arrive (and stay).

Knowing the shops on Main Street so well, I was surprised we’d never been in the Six Pence Pub. Then I remembered neither of us are bar people, never have been! But since this place came highly recommended, we decided to pop in after we were checked and settled in our room. It did not disappoint. Though I didn’t get them in the picture, I’ll have to admit the fried pickles here are probably the best I’ve ever had.

Of course the trip would not have been complete without a leisurely drive on the Blue Ridge Parkway before we left on Sunday. It’s my dream to someday drive the entire Parkway from start to finish. We always gravitate to ‘our’ overlook… Big Bear overlook. This overlook has 360º scenic views and is very near Price Lake. It was disappointing to see that someone had stolen the rustic sign that’s resided there since we started coming – I guess this tells me it’s not just ‘our’ favorite overlook.

Here’s another panoram of the luxurious mountain laurel.

As usual, I found a t-shirt in a local store that I just couldn’t leave without. This shirt might as well have come preprinted with my name on it…

So I guess I’ll save my story of walking around naked in the dark with a gun for another time.

Everyone probably knows by now about my acrophobia (fear of heights) as well as my contradictory fascination with extreme-height architectural feats. I’ve written of the Grand Canyon Skywalk, the Alpspix and the Burj Dubai. I’ve heard of viaducts in my life, but I wasn’t aware that’s what the one along the Blue Ridge Parkway on Grandfather Mountain was called. Appropriately named, I think. So what’s a viaduct? Here’s the official info from the visitor’s center:

“A viaduct is a long bridge with a series of spans supported on piers. The Linn Cove Viaduct is 1243 feet long and 35 feet wide. The “S” curve roadbed rests upon seven vertical piers that are spaced about 180 feet apart. The roadbed is made up of 153 precast concrete sections held in place with wire cables and epoxy glue. No two sections are exactly the same and only one section (#93) is straight and square. Each section weighs nearly 100,000 pounds. Linn Cove Viaduct is the first in this country to incorporate progressive placement of sections. What this means is that the bridge is built upon itself. Workmen, materials and machines move back and forth on the completed bridge to place each successive section. Little or no damage is caused to the landscape over which the viaduct is being constructed.”

Ground was broken on the Blue Ridge Parkway on September 11, 1935, and all but 7.5 miles of it’s 469 were constructed by 1967. The parkway was completed in September of 1987. This final section below, around a rugged and rocky perimeter side of Grandfather Mountain, accounted for the twenty-year gap.

There was much controversy and debate over this ‘missing link’ as state and private officials argued over the environmental impact. How would they build a road at an elevation of 4,100 feet without damaging one of the world’s oldest mountains? Finally, NPS landscape architects and FHA engineers agreed the road should be elevated and/or bridged to eliminate the need for massive excavation. The result? The most complicated concrete bridge ever built – the Linn Cove Viaduct. The only trees that were even cut for the construction of this section were those directly beneath the roadway. 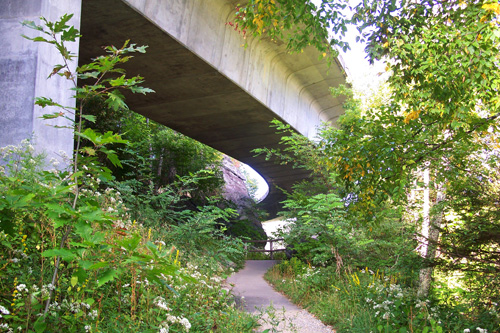 The Linn Cove Viaduct Visitor Centre is located at Milepost 304.4, right after you cross the viaduct itself. You really have to look for it because it’s not clearly marked.The area has restrooms and a trail to Linn Cove Viaduct, of which we partook. The trail is less than a mile round trip and is moderate, starting out as an accessible paved trail at the visitor center and leading to a beautiful view of the viaduct from underneath – then finally giving hikers access to the Tanawha Trail. You can continue up the remaining dirt trail and climb by huge boulders for another 1/3 mile to get some views of the surrounding areas – but this personally scares the heck out of me and you won’t catch me doing it. As I watched Keith climb onto a huge boulder, I admit I had to turn my head and got more than a bit upset. The dropoffs are straight down and at that height, well – I shudder to think of the accidents that may have occurred there by persons striving to get a ‘better view’.

I have to say though, the views from this viaduct are the best I’ve ever seen from any of the North Carolina mountains.