The value of Unconditional Love

I’m so pissed off as I’m writing this that after I finish I may choose to not even post it at all. At the least this will be a raw and jump-all-over-the-place post. The question lingering in my head is, how can someone choose to abandon their animal? What god-given right do they think they have to consider these defenseless beings disposable?

In the small neighborhood where I live, we know each and every dog that ‘runs around’ (yes, there is a leash law but not really enforced) and know that each one indeed has a home. Three days ago, a white adult male Boxer showed up at the house next door. He will not leave the area, and has even made a huge bed of yard brush in the back yard of the house we think he was abandoned at. Our street is but a cul-desac consisting of four houses. The house two doors down was foreclosed on a few months ago, so the bank sent a contracted group of cleaners and yard personnel to get the house ‘ready’. It was approximately an hour after the hired personnel departed from their second visit out that the collared AB (abandoned boxer) showed up. 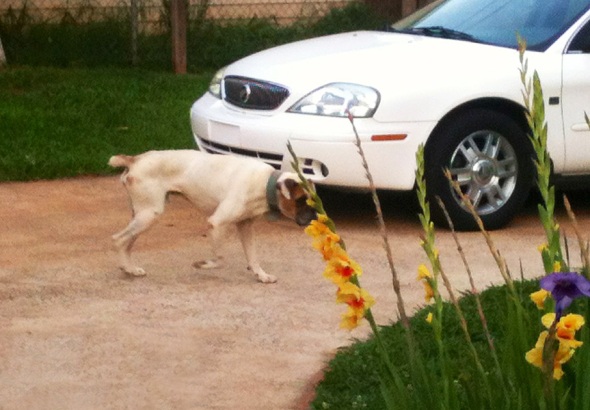 This is the closest shot I could get of him.

He appears to be a senior dog who’s non-aggressive, but he won’t come to anyone. I later gathered he is deaf since he didn’t pass my hearing test of several loud noises when he wandered in our front yard. Once he notices me by arm signalling, he always slowly turns around and walks back to his ‘house’. He will wander a short distance throughout the four homes on our cul-de-sac, but always returns to the spot where he was abandoned. It doesn’t take a damn rocket scientist to figure out what happened.

He’s waiting on his family to come back for him.

Yesterday I contacted the SPCA (humane society) who gave instructions to call the pound. I am not calling a kill shelter on this animal, it’s not his fault his family doesn’t want him anymore. Today I’ve spent hours attempting to reach boxer rescue organizations in the area. Though I’ve found a handful, half won’t consider a stray, another is full, most want to be contacted via email, and I’ve left messages with the two others. It appears that Sunday is not the optimal day to reach anyone.

I live in Gaston County on the North/South Carolina border – if anyone has any suggestions as to other contacts, I’d sure be open to them. Other than that I’ll just wait and hope I get a returned call back tomorrow at work.

This entry was posted on June 10, 2012 by Bonnie. It was filed under Animals and was tagged with 2012, Abandonment, Animals, Boxers, Family, Humane, life, Love, Pets, random, Random Thoughts, Shitty People, thoughts.