Here’s a nice bright spot for all of you this morning. The University of Iowa Hawkeye fans succeeded in breaking the Guinness world record for the largest organized Hokey-Pokey dance. How cool is that?

The record-breaking event happened September 3rd at the Iowa River Landing as part of Fryfest, an annual festival named after the former football coach Hayden Fry. 7,384 Hawkeye fans gathered to break the record, which was previously recorded at around 4,431 in 2003.

81-year old Fry did not participate in the dance but did address the crowd to announce they were now members of the Hokey Pokey team. The crowd danced for about five minutes as part of the second-annual FRY Fest, which preceded the start of the Hawkeye football season this past Friday. 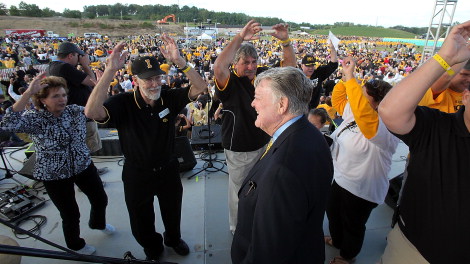 Former Iowa Football Coach Hayden Fry watches as his wife Shirley (from left), Coralville Mayor Jim Fausset, and radio personality Ed Podolak participate in an attempt to set a world record for the most people doing the “Hokey Pokey” Friday, Sept. 3rd, 2010 during Fry Fest at the Iowa River Landing district in Coralville.

I’ve always said, a little song and dance will brighten up any day. 🙂

This entry was posted on September 8, 2010 by Bonnie. It was filed under News and was tagged with 2010, Dance, Guinness World Record, Hayden Fry, Hokey Pokey, Iowa, Iowa Hawkeyes, Iowa Hawkeyes football, News, University of Iowa.