After a hearty Cracker Barrel breakfast on Sunday morning, K suggested driving down to the newest indoor fleamarket to walk some of the food off, to which I happily obliged.

There was no agenda, nor any certain thing we were looking for. The few times we’ve been to the place (ah, air-conditioning is a must) we’ve come away empty-handed – but it’s all good. K loves antiques, and is quite educated about them. Honestly, for me, it’s the walking around together and ‘discovering things’ with each other that matters so – it seems to go unsaid that he feels the same way. So we walk, hold hands and talk, and look… and happen upon it…

The print is entitled, Making Friends. The artist is Burton Dye, and the debut date was 1986. Same graduation year, and same high school… yes, yet more nostalgia.

K just finished remodeling his own bedroom, and in doing so moved into a larger room in his house. The color of paint he chose was a light to medium sort of periwinkle blue – it hints of blue, gray and lavender, and translates to airy and soothing. In combination with his dark furniture and just the right amount of beautiful sunlight the room gets, it was an exquisite choice. 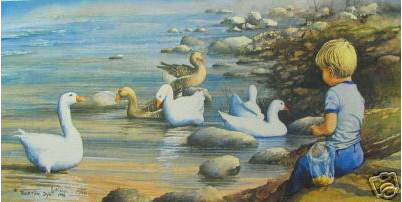 Flashback to the picture. There it sat, amongst it’s competition, all of which were neatly lined along the floor of the vendor. Just like magnets, both of us were instantly drawn to this one. Print no. 1241 of 1900, it said – and it was very much in mint condition. Still in it’s original frame and matte, the wood frame has two tiny periwinkle blue pinstripes down all four sides that matches the matte – these were only visible up close.

The print is an image of a small boy with blonde hair, sitting along the shore of a riverbank to feed a flock of geese and goslings. The boy’s portrayal in the print is nothing less than that of pure innocence. I have yet to share my own perception of the art with K.

Shown is a young, innocent boy – soon to be in search of the finer things in life, which Capricorns are so noted for – but also appreciating the simple things. His love for animals is well-noted… as well as his love for the water – and fishing. The boy’s youth still leaves much to the imagination, such a large future lies ahead of him. With the comparable difference being light brown instead of blonde hair, I think the profile of this young lad so very closely coincides with that of K’s own childhood pictures. I think it’s fair to say this print has captured a piece of my heart for many years to come now…

This entry was posted on August 2, 2010 by Bonnie. It was filed under Animals, Art, Emotions, Family, Friends, Thoughts and was tagged with 2010, Art, Miscellaneous, Personal, relationships, thoughts, Writing.