A solstice is an astronomical event that happens twice each year, when the tilt of the Earth’s axis is most inclined toward or away from the sun, causing the Sun’s apparent position in the sky to reach its northernmost or southernmost extreme. The name is derived from the Latin sol (sun) and sistere (to stand still), because at the solstices, the Sun stands still in declination; that is, the apparent movement of the Sun’s path north or south comes to a stop before reversing direction.

The term solstice can also be used in a broader sense, as the date (day) when this occurs. The solstices, together with the equionoxes, are connected with the seasons. In some cultures they are considered to start or separate the seasons, while in others they fall nearer the middle.

A common misconception is that the earth is further from the sun in winter than in summer. Actually, the Earth is closest to the sun in December which is winter in the Northern hemisphere. 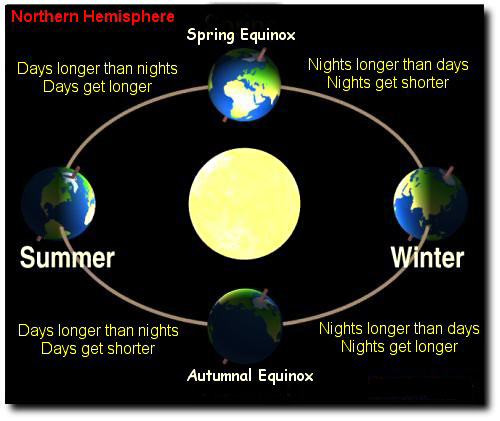 The reason for these changes has to do with the Earth’s yearly trip around the sun. For part of the year the Earth’s North Pole points away from the sun and part of the time toward it. This is what causes our seasons. When the North Pole points toward the sun, the sun’s rays hit the northern half of the world more directly. That means it is warmer and we have summer.

The day of the summer solstice is the longest day of the year. The length of time elapsed between sunrise and sunset on this day is a maximum for the year. In the United States, there are about 14½ hours of daylight on this day.

This entry was posted on June 21, 2010 by Bonnie. It was filed under Astronomy, Freshly Pressed, Miscellaneous, Nature, Thoughts and was tagged with 2010, life, Nature, Seasons, Summer.

Hi, Bon here! From time to time I attempt to put my thoughts into words. Lover of God, family and my country. Thanks for stopping by!